For Mountainwood Homes’ owners Robert and Heather Wood, the recent Oregon wildfires came too close for comfort. They were one of the residents affected by the Chehalem Mountain-Bald Peak wildfire that started 850 yards away from their home. The wildfire was caused by an improperly extinguished campfire on a neighboring property. 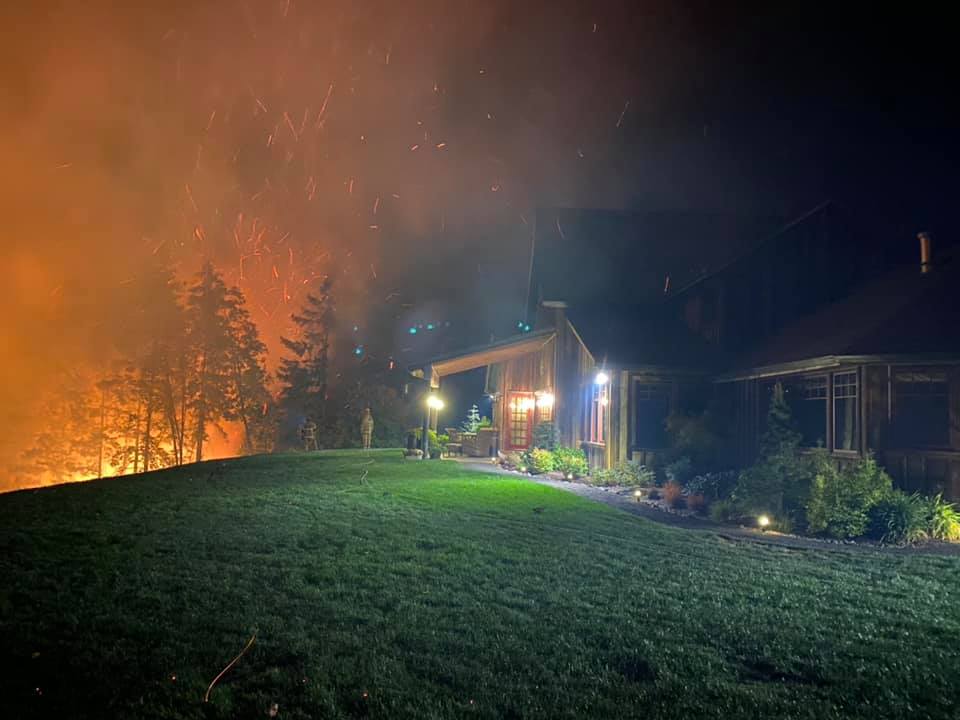 On Tuesday evening around 5:45 pm, a neighbor called to let Heather know there was a fire in the canyon headed in their direction. The neighbor wanted to check to see if their dog Rudy was home and if she should go get him. Luckily, Rudy tagged along to the office that day. Heather let Robert know about the fires, and they headed home. As she drove past Mountainside High School on Scholls Ferry Road, she noticed the ominous, dark skies ahead.

As they arrived home, they watched the smoke come over the canyon. They were not sure if they should stay or go.

“No one had said anything about evacuations yet,” Heather added. “But I knew I’d have to start packing. I thought, what do I really need? I love this entire place, but I can’t take it with me. You realize that you don’t really need much so I grabbed enough for a few days – medicine and makeup,” she laughed. 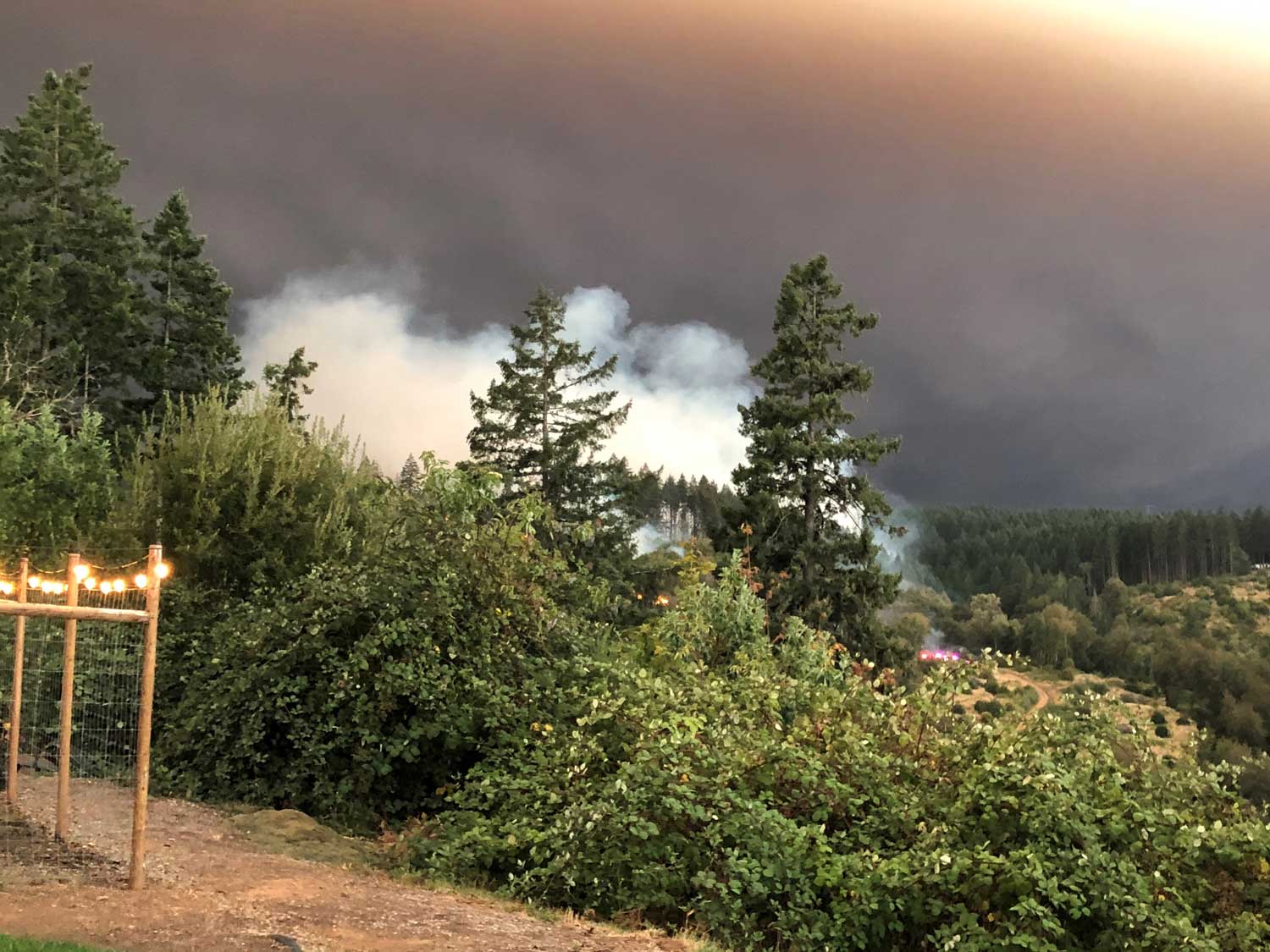 When the fires started, the wind was blowing away from Wood’s home. Robert monitored the direction of the smoke and felt his home was not in danger just yet.

“I loaded up my car and could leave within a minute,” Robert said confidently. “I wasn’t trying to be a hero or protect my house. But you were not going to get me to leave.”

Then, the fire shifted and started to hit old slash piles, and headed back their direction. At 1:00 a.m., the fire jumped 300 yards and was right underneath their house and extended clear down to the bottom of the canyon.

“I saw smoke going straight up,” he said. “I knew then it was coming to our house.”

Robert listened to his scanner, and four fire engines showed up in the driveway. By 3 a.m. Wednesday morning, the fire had moved all the way to their backyard grass.

“The 30-foot wildfire flames were right there about 25 feet from our house,” he said.

“When the firefights arrived, I said, ‘Ok, I’m going to get out of your way.’ I stayed and listened to what they wanted me to do,” Robert said. “While they were fighting off the fire, I was using our hoses to spray down the embers that blew onto the bark dust and the roof.”

On Wednesday morning, Robert’s son Derek arrived with extra sprinkles and took watch. No one slept for over 48 hours – they stayed busy spraying down the house, putting out spot fires, and getting ready for nightfall. 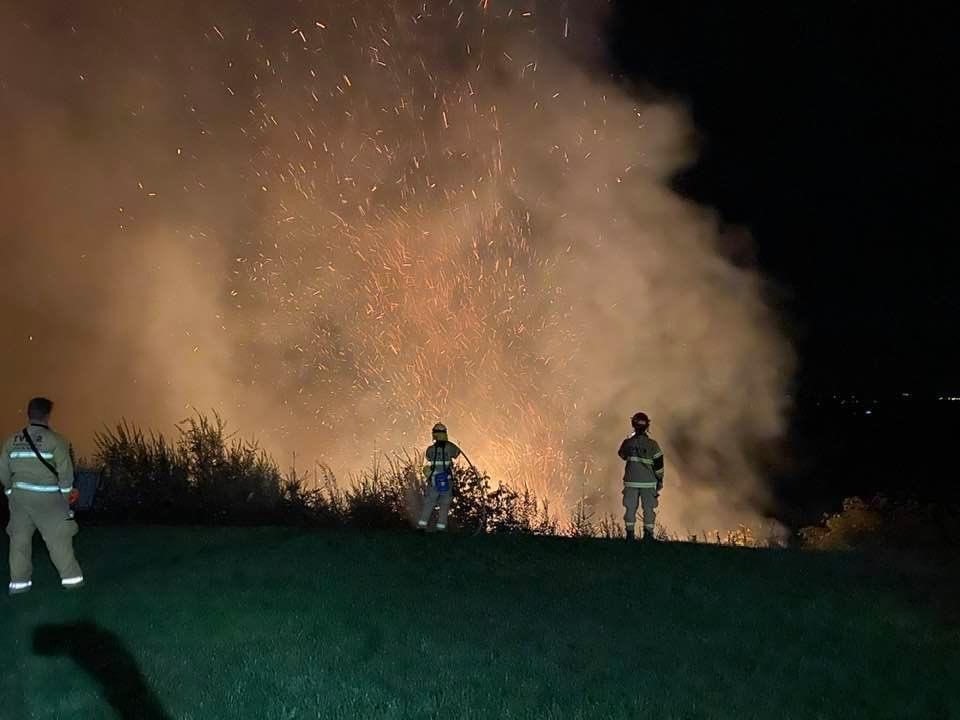 The firefighters dealing with wildfires have to closely manage water resources. They only have the water in their trucks. Three hundred gallons goes away in 10 minutes. The fire crew’s job is to defend people’s homes. There are not enough water resources or access to put out a wildfire. Their job is to figure out a strategy to get a line around it to stop the fire.

“Another thing that went through my mind was, I have a neat-looking house with reclaimed barn wood siding. HardiePlank may have been a good idea right now –along with a metal roof,” Robert said. “The house had been in the hot sun for two months, so the siding was extra dry. We learned quickly that when sparks land in bark dust, after a few hours it turns into a smoldering thing.”

A fireline was cut around the house and throughout the canyon to create separation so the wildfire did not jump lines again.

“Once our structure was safe, the firefighters went on to the next person’s house to fight the fire, and we were left alone,” Robert said. “They have come back and regularly checked on it. But a civilian thinks a fire is out, but it is not out. There are flare-ups, and smoldering areas 10-feet around and flare up 8 feet tall that will burn for a bit. We have stumps that will continue to burn for a long time. 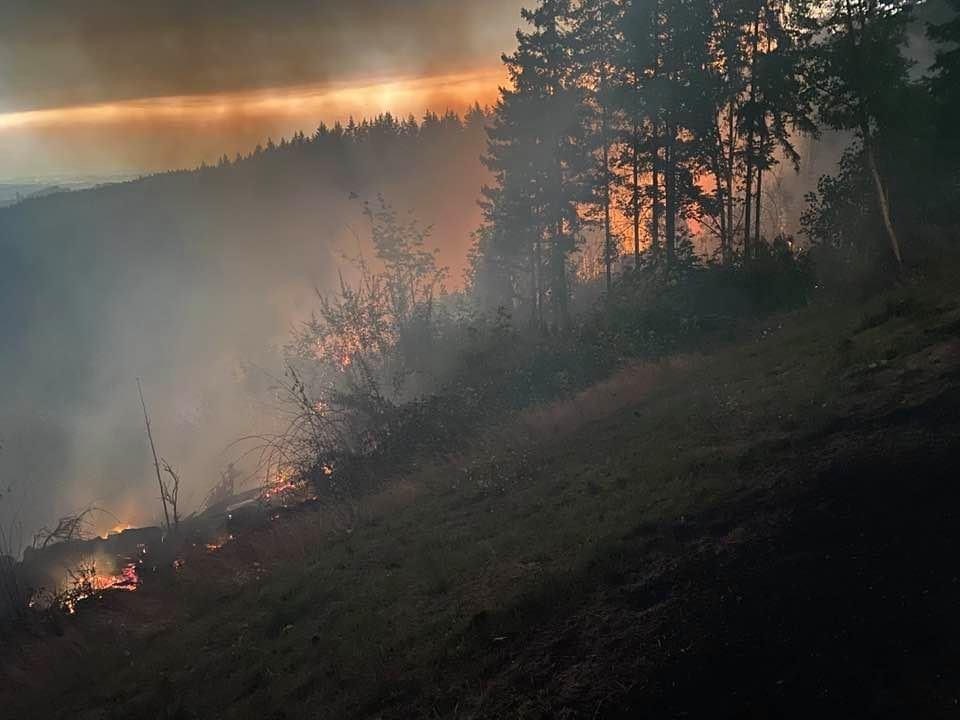 Preparing for the Future

“I have heard of defensible space before, but now it’s real,” Robert said. “We have some areas to improve on our property. Another fire may never happen in my life again, but it seems prudent to keep a fireline to create separation on the property.”

As a homebuilder, Robert is always looking for ways to make homes safer.

“We have a 1,500-gallon storage tank, and we will probably add a 5,000-gallon tank with a fire connection. If a truck comes onto the property, it can access water.”

Heather was reminded that it is important to know how things work. Your spouse should not be the only one with the information. Do you know where to turn off the electrical panel? Where are the hose bibs? How much water is in the tank?

“The time to learn it isn’t during a catastrophe when it’s high stress and your adrenaline is racing,” Heather said. “You need to know those things ahead of time to feel comfortable and confident in how your home runs.”

“You can’t have a big enough generator, propane tank, or well,” Heather added. “If you live in the country, you need to be prepared. We were out of power for five or six days.”

This experience makes you appreciate the little things.

“When designing a home, add more hose bibs,” Heather advised. “Usually there are hose bibs in the front and the back of the house, but we had one on each side of the house which was helpful,” she added. “It’s not expensive when you’re talking about plumbing your whole house.” 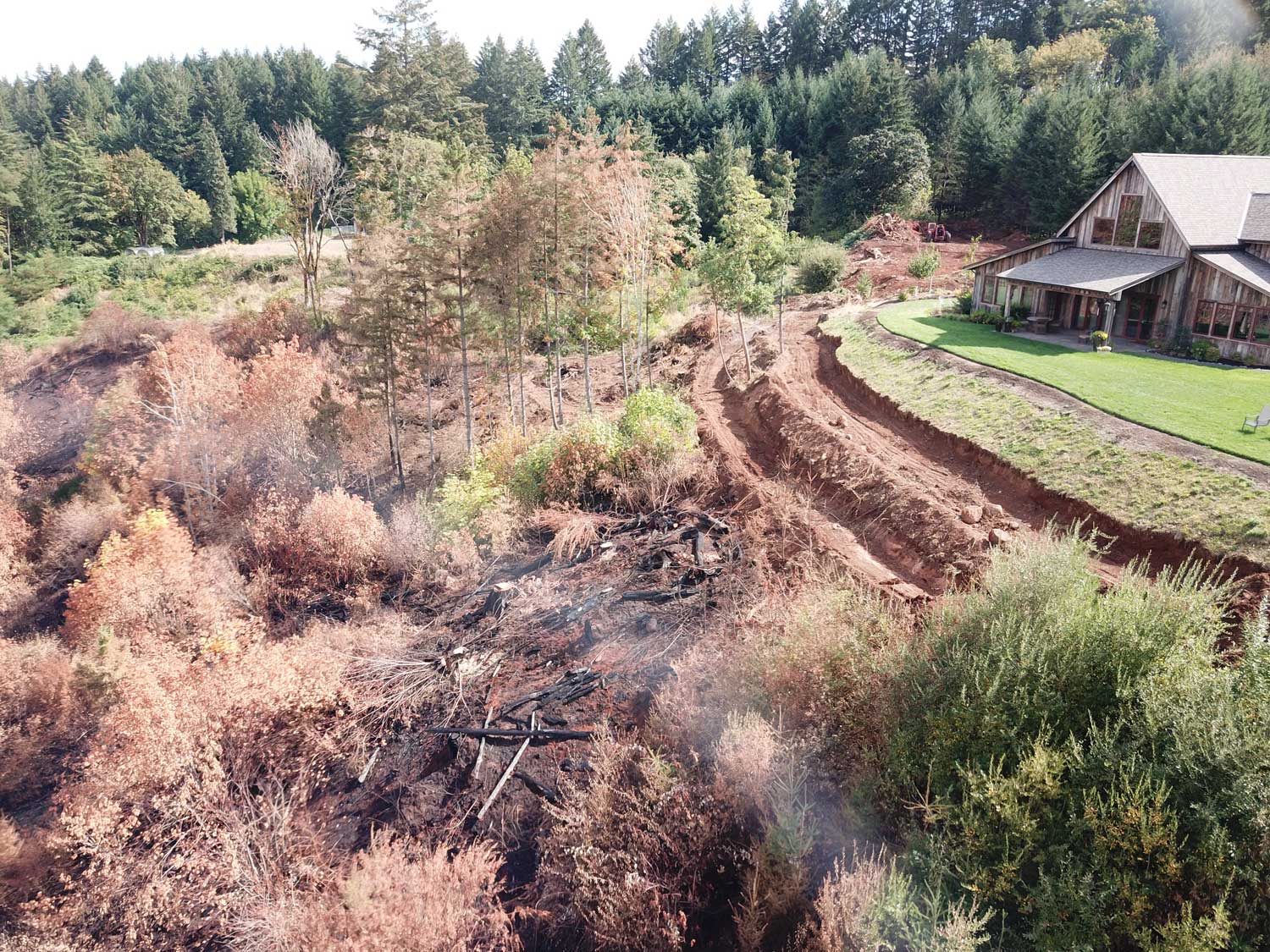 “My number one takeaway is: the fire people are freaking heroes. They stayed up all night. Jumped out in front of the fires, put their lives and safety on the line to take care of our home. Not one of them complained, and I saw a lot of them come by,” Robert said. “They all had the attitude, ‘We’re here to help; that’s what we signed up to do, and we’re going do what we can to help.’”

“Everyone was very courteous, humble, and forthcoming with information on what to expect,” Heather said. “I felt great comfort when I heard their trucks coming in.”

“It is a service that we’re paying for as citizens,” Robert said. “It’s something that we don’t want to use, but they are always there, and they do a great job.”

“As homeowners, we need to be better prepared. Speaking both personally and for society, there are very few people prepared to leave on a large scale,” he said.  “We need to look at how our homes are set up especially those who live in the country away from typical service areas. We need to help the firefighters before they get there by creating defensible spaces and being ready for that kind of event if it were to happen again.”

Looking back, Heather recalls a simple moment in a time of crisis.

“We said a prayer to keep us safe and protected before the wildfire got too close, ” she said. “A few days later when the crew came by to check in on us, they said that they had never seen anything like it before – the flames were nearly bouncing off an invisible fence around our home. I told them, “I know what that was about. We’re so fortunate!” 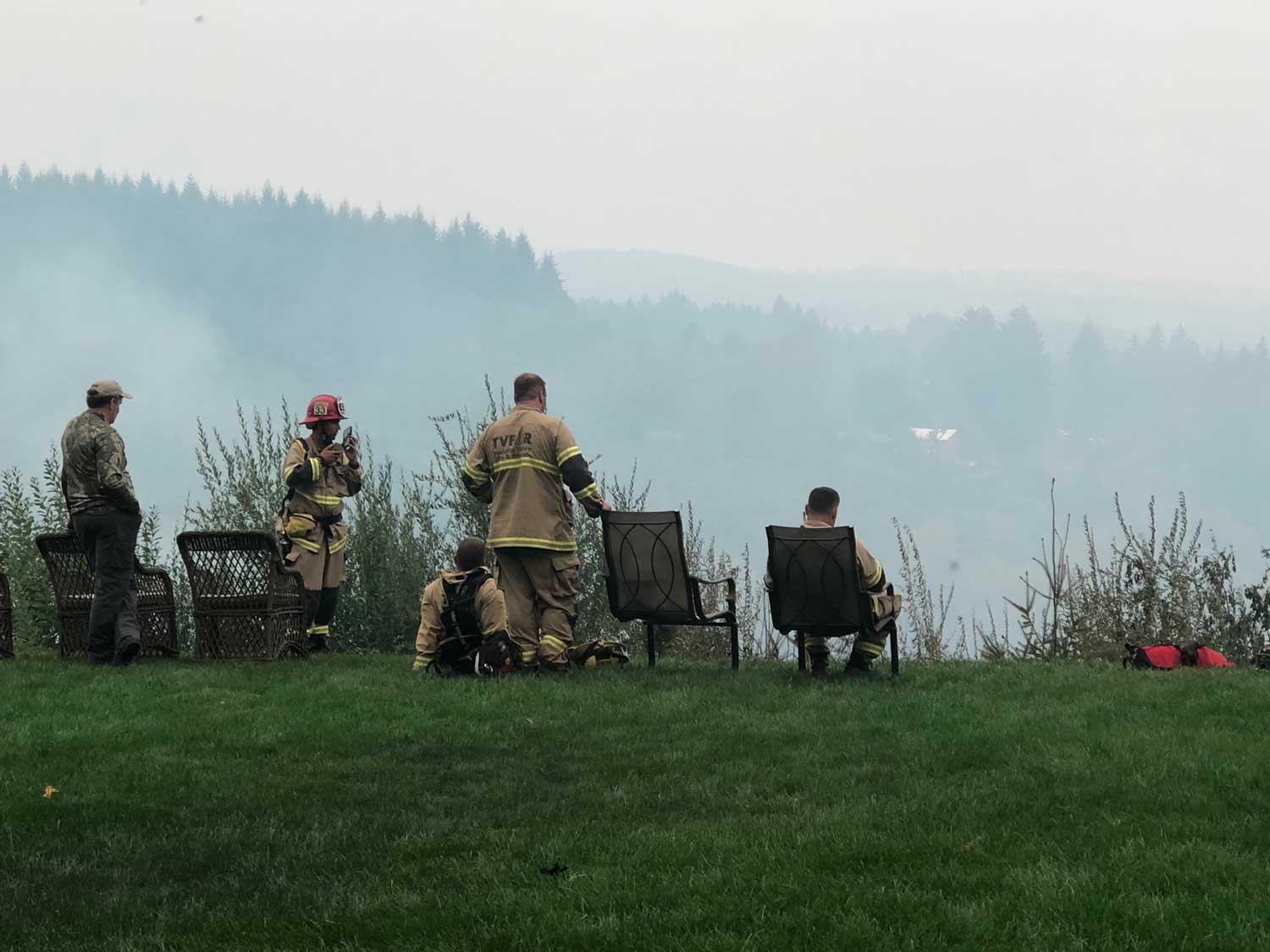 Tualatin Valley Fire & Rescue has some great resources to help prepare you for a disaster or wildfire. Take the time to create a plan with your family.

How to Prepare Your Home (PDF)

Learn how (and whether) to shut off your utilities (PDF)

Consumer Reports: What to Put in Your Medication Go-Bag